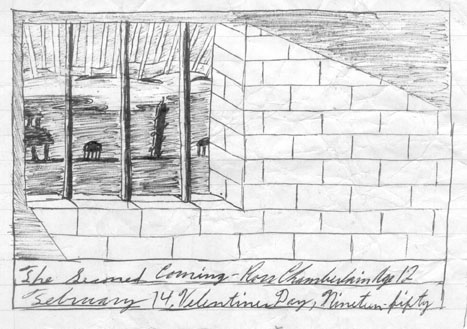 I rarely attempted much in the way of religious topics in my youth, other than the most familiar, usually associated with Christmas, sometimes Easter. This particular idea, of seeing the Event of the Second Coming, or at least some of the heralding phenomena of it, from behind bars -- but with the light from it pouring in through the barred window -- struck (and strikes) me as emotionally and philosophically evocative. Note that the buildings along the horizon are sort of futuristic, suggesting little immediacy in my anticipation of that event. Looking back I find it interesting that I particularly noted that I did it on a Valentine's Day, though any significance that in itself might have held is lost in the half century since.