I missed the 2003 Corporate Challenge. It was set up to be spread out through the year instead of within a few weeks in spring. The 5K run was put off until fall, and the 1600-meter race, originally scheduled for the nexus of April and May, was also postponed until further notice. The shuffleboard and bowling competitions, though I didn't qualify for the latter, were likewise scheduled to later dates. I'm no longer with ADT Security, now, so will not be participating in any of them -- nor any in the future (barring another change in employment to another participating company---unlikely).

Disappointing -- there was a certain satifaction at being able to compete with others in my general age group, regardles of whether I medaled or not. At least, as the story below demonstrates, I was able to do so a few times, so I can be grateful for that. I see the 2004 schedule reverted to the previous pattern. Sorry I missed it---though I didn't see a reference to the 5K race this time around.

I have been running a couple of miles through my neighborhood in the mornings, though my new, variable work schedule tends to prevent me from keeping up a steady pattern these days. I used to run two miles weekday mornings, and frequently three miles each on Saturday and Sunday mornings (somtimes four if I was feeling particularly sprightly). I still try to do it around 5 o'clock when it's still cool. That's roughly late March or April into October; even in Las Vegas it gets too chilly in winter (anything below 40 degrees F is too cold by my standards, now that I've become accustomed to the southwestern climate). I time myself; to date my record is just a tad faster than 9 minutes to the mile. I never claimed to be Roger Bannister! But this year (2004), as of mid-June, my record is still 19:25 for two miles, or very roughly 9.5 minutes to the mile.

Well, I eventually discontinued my morning running, due to the awkward scheduling -- Some days I'd work until 'round midnight, some days I'd start at 7 a.m. I miss it now and then, though I also remember that when I was running regularly, I'd wonder what the heck I was doing and why! 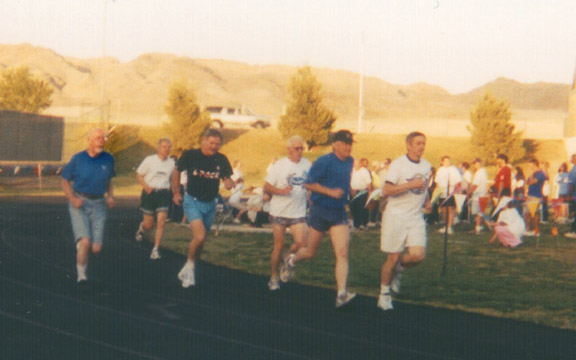 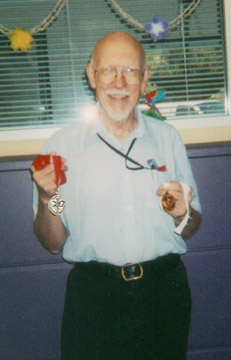 [2002]
That's me, comin' 'round the bend, furthest stage left in the left-hand snapshot. The 1600-meter race (about 1 mile) pits runners in different age groups and corporate divisions against each other, though several age groups ran at the same time (men and women separately). Everyone in the Las Vegas Corporate Challenge competes on behalf of the company they work for, in my case ADT Security Systems. There are four different divisions dependent on company size, and competition is within divisions -- ADT is in Division C, for example, so I was not competing against runners in Divisions A, B or D. (All competitors are amateurs, by the way; no one who competes elsewhere professionally qualifies.)

I medaled silver in this race, but one must consider that there was only one other guy in the age 60-64 category, and he got the gold (I don't know, that may be him in the white tee, 3rd right). Still, out of the 20 people in this heat, of ages about 50 up, I was 13th, and I don't consider that unlucky at all!

I also ran a few days earlier in the 5K race (about 3.1 miles), and got the bronze medal in my age category. That one was handled a little differently -- there were two heats, one men, the other women (who began about 5 min later, I think). We started in a big bunch, like you see at the marathon races, instead of one starting line; and we were sorted by timing at the finish line. I made the distance in 28 min 15 sec. to get the bronze for men 60-64 in Division C; however, not only were a couple of guys in my age group ahead of me but I found in the statistics that there were also two guys in the 65-up category who were faster, one by almost 5 minutes! I hope next year, when I'm 65 ("will you still love me?"), if I'm still doing this, that I'll even be able to place! [As noted above, I didn't make it.]