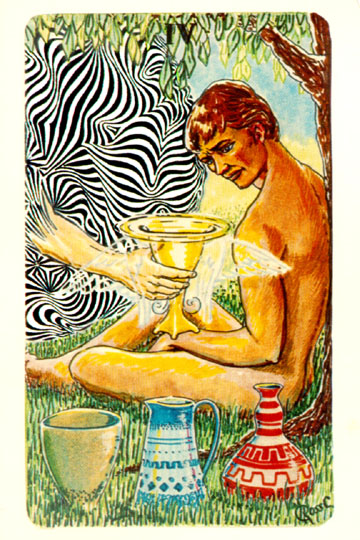 This was my entry to The Fantasy Showcase Tarot Deck, a project the late Bruce Pelz began in earnest in 1969 and completed in 1980. There were 85 artists involved, more if you count those who never completed their assignments and had to be replaced. Each contributor supplied art for one card in the deck, and there are several extra cards in this deck than in the standard, with the addition of two major trumps and of an extra court card for each suit, the Lady, who ranks between the Knight and the Queen. Most of that happened after I'd selected the card I felt most apt for me to design, the Four of Cups. I did a pretty straight-forward interpretation of the standard card, or at least the one in the popular set designed by Pamela Colman Smith as instructed by Arthur Edward Waite. Now, I don't have my regular Tarot deck interpretation guide immediately to hand, but the description in this one's guide is "Re-evaluation of one's life-style; empathy from friends," while reversed it is "Re-awakening; possibilities of new beginnings." I'm not sure that's how I saw it when I selected it, or drew the design (and no, that's not a self-image, not even in my fantasies), but while I might possibly have done something slightly different with it given the opportunity today, I like it still.

In a less serious mode I more recently designed a couple of Tarot cards that fall well out of the arcana. See the New Tarot cards in the Newer Stuff Gallery.